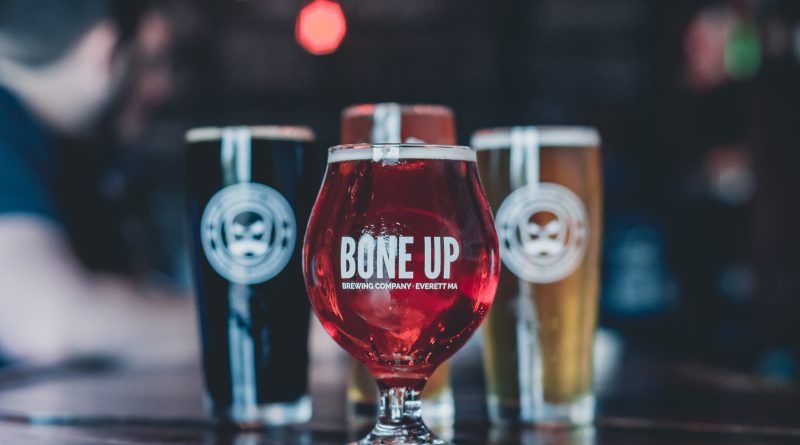 Bone Up Brewing in Everett, MA is one of the new kids on the block in my local area. Located right down the street from the mighty Night Shift Brewing, and around the corner from Short Path Distillery, the quaint taproom run by husband and wife duo Liz and Jared Kiraly is quite the place to kick back with friends. The microbrew features four year-round brews, “Key Lime” (fruity white ale), “Shut Up Kelly!” (porter), “Extra Naked” (cream ale), and my favorite, “Wasted Life” (IPA), along with rotating cask, seasonal, and limited offerings.

I’ve been frequenting the brewery almost since they opened as a go to place to hang out and read. Some people go to coffee shops, I go to breweries, which makes reading a bit difficult if there too long. Upon entering the brewery, you are welcomed by a Metallica themed pinball machine, bookcases of various games, and artwork and photographs along the walls – all softly illuminated by dozens hanging bulb lights. This month, Bone Up celebrates their one year anniversary, a milestone not to take lightly. The party is August 26th and will go all day with a pig roast, ice cream sandwiches, live music, hot sauce flights, and 3 special celebratory brews.

Other events, including food and art pop-ups, are in planning and there’s always the monthly music-trivia night happening every first Thursday of the month.

Bone Up Brewing is celebrating their one year anniversary, what are your thoughts regarding the past year? Has running your own brewery been all its cracked up to be?

It’s been exhilarating and hectic and exciting and tiring and confusing and chaotic and it’s been better than we’d dared hope. Nearly every one of our predictions has been proven wrong, but we couldn’t possibly be happier about what our weird little brewery has become!

Let’s back up a bit, or a lot, what initially got you interested in beer?

When did the idea of having your own brewery come about and how long did it take to make it happen?

Bone Up was (often fairly loosely) a work in progress for about eight or nine years before it became a real thing. But a lot of that was just getting relevant(ish) work experience so we could try and learn from other peoples’ mistakes. Once we really decided to grab the bull by the balls and put our collective noses to the grindstone, it took about two years or so.

For those interested in taking the leap from home brewing to brewery, what lessons have you learned and what advice would you offer?

Oh jeez, there’s a hole with no bottom. One of the biggest lessons we learned was: when it comes to equipment, you get what you pay for (or, as some people prefer to put it: buy nice or buy twice). Also, working with contractors can (and often will) redefine what frustration means to you. As for advice: have more money. For something a bit more practical, we’ve found that it pays to know the exact ins and outs of every piece of equipment – if your hot wort pump starts to act up and you can’t diagnose or fix it, there’s not a lot of people you can call (especially on short notice).

You’ve developed your own blend of a Belgian/English style yeast that is used in every beer. How long did it take to develop? Why not use other strains, to have a consistency with taste?

It’s something that we developed over the span of a couple years during our R&D (read: homebrewing) days – we used to use a Belgian yeast for everything, but those strains have so much character that they can overwhelm a lot of the other flavors. We love how expressive the Belgian strain is, but the English side helps to mellow it out a little bit and produces tasty fruity esters that we like so much. We use a house yeast at Bone Up because we think it’s neat to have an underlying flavor signature across all our beers and it’s a nice nod to old-school brewing traditions.

If you had to brew a beer for any band, which band would it be and what type of beer would you make?

Dang, good question – we think a lot about what music would pair with our beers, but we seldom do it the other way around. For the band, we gotta go with the Weisstronauts – they’re a longtime personal (and local) favorite of ours, plus we’re hoping to have them play at our one-year anniversary party [they are] which means we can actually make this a real thing! For the beer itself, we’d have to go with something nice and easy drinking that keeps you coming back for more – maybe a light-bodied, malt-forward pale ale or a hella crisp saison.

Our runner up for the band would have to be Red Fang (our first date was a Red Fang show), which would have to be a heavy-hittin’ bruiser of a beer. And then from there we’d probably just do that beer nerd thing where we try to make a sort-of-forced joke about one of their song titles. Maybe an imperial stout named Night Destroyer? Or an old ale named Prehistoric Nog? I dunno.

The brewery is about to start canning, what can you tell us about it? Will each beer have their own distinct artwork design? Will the cans be available only at the brewery or are you entering the distribution market?

We’ll be filling 25.4 oz Big Stupid Cans starting at some point this summer, but we’ll only be able to have them at home base. Long story short, we’ll be using a Crowler setup for our cans, which means they won’t really have the shelf life to get shipped out to stores (for all practical concerns, they’re more like disposable growlers than anything else). To start off, we’ll have one label for all the beers and jot down the style on the front of the can, but Liz has some special doodles in the works for more involved label artwork down the line!

What are your plans for year number two? 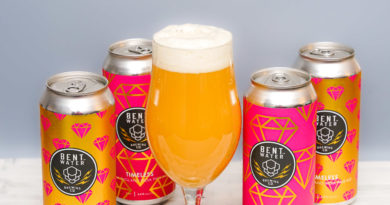 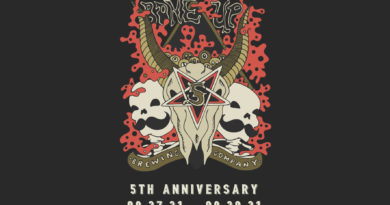