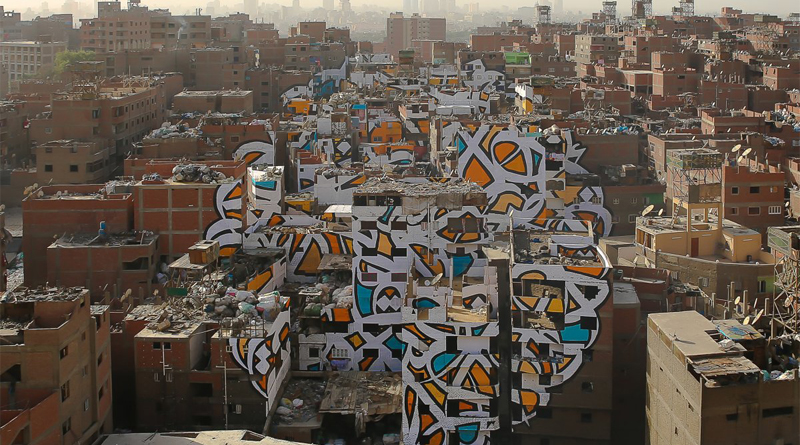 In eL Seed‘s new project ‘Perception’ he questioned the level of judgment and misconception society can unconsciously have upon a community based on their differences.

In the neighborhood of Manshiyat Nasr in Cairo, the Coptic community of Zaraeeb collects the trash of the city for decades and developed the most efficient and highly profitable recycling system on a global level. Still, the place is perceived as dirty, marginalized and segregated.

To bring light on this community, with his team and the help of the local community, he created an anamorphic piece that covers almost 50 buildings only visible from a certain point of the Moqattam Mountain. The piece of art uses the words of Saint Athanasius of Alexandria, a Coptic Bishop from the 3rd century, that said: ‘Anyone who wants to see the sunlight clearly needs to wipe his eye first.’ The Zaraeeb community welcomed his team and himself as we were family. el Seed commenting:

“It was one of the most amazing human experience I have ever had. They are generous, honest and strong people. They have been given the name of Zabaleen (the garbage people), but this is not how they call themselves. They don’t live in the garbage but from the garbage; and not their garbage, but the garbage of the whole city. They are the one who clean the city of Cairo.”

eL Seed is a ‘calligraffiti’ artist, a blend of the historic art of Arabic calligraphy and the modern art of graffiti, mixing street culture from Paris and Arabic history to poetic effect. Born to Tunisian parents in the suburbs of Paris, eL Seed spent his formative years juggling different cultures, languages, and identities. Today eL Seed’s pieces have developed out of two worlds colliding, with these two cultures clashing and blending into one another, to form a new identity, a unique mark and a distinctive style.

eL Seed uses intricate composition in his work to call not only on the words and their meaning, but also on their movement, which ultimately lures the viewer into a different state of mind. Working primarily with subjects that seem contradictory, eL Seed’s art reflects the reality of mankind and the world we live in today.